Khmer Language (ភាសាខ្មែរ) (Cambodian) is the language of the Khmer people and the official language of Cambodia. It is the second most widely spoken Austroasiatic language after English and French. Khmer has been considerably influenced by the Brahmi script of ancient India by way of the Pallava script, which was used in southern India and South East Asia during the 5th and 6th Centuries AD. The oldest dated inscription in Khmer, found at Angkor Borei in Takev Province south of Phnom Penh, dates from 611 AD.The Khmer alphabet closely resembles the Thai and Lao alphabets. Khmer Language Feature :

This is syllabic alphabet in which each consonant has two forms, one with an inherent /a/ (first series) and one with an inherent /o/ (second series)
Vowels are indicated using either separate letters or diacritics, which written above, below, in front of, after or around consonants. The pronunciation of the vowels depends on whether a consonant they are attached to is of the first or second series.
All consonants have a subscript form which is used to write the second consonant of a cluster.
In a Khmer text there are no spaces between words, instead spaces indicate the end of a clause or sentence. 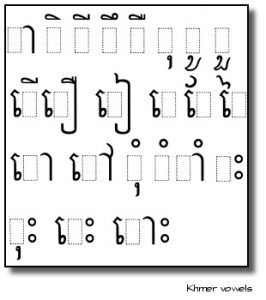 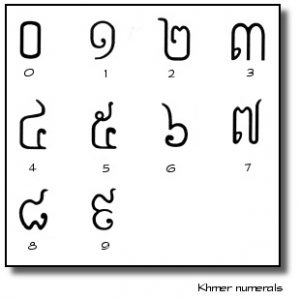