Banteay Chhmar has a lot to offer to interested visitors. That goes from visiting 12th century Angkorian Temples – the most famous one called Banteay Chhmar Temple –, Pol Pot Baray, the silk center of Enfants du Mékong to getting an insight into rural life of the Cambodian countryside and its wildlife. 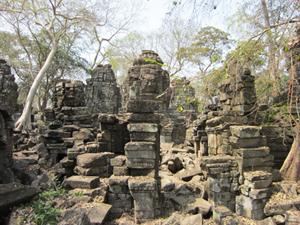 Banteay Chhmar​ is located in Thma Puok District in Banteay Meanchey province in northwest Cambodia. It is 63 km north of Sisophon and about 20 km east of the Thai border. The commune of Banteay Chhmar contains 14 villages. The massive temple of Banteay Chhmar, along with its satellite shrines and reservoir (baray), comprises one of the most important and least understood archaeological complexes from Cambodia’s Angkor period.

Like Angkor Thom, the temple of Banteay Chhmar was accomplished during the reign of Jayavarman VII in the late 12th or early 13th century. One of the temple’s shrines once held an image of Srindrakumara rajaputra (the crown prince), probably a son of Jayavarman VII. The long Old Khmer inscription found at the site (K.227), and now on display in the National Museum, Phnom Penh, relates how this prince or a king (samtac) was protected on two different occasions by four royal servants, all of whom lost their lives in his defense. The inscription lists the names of these officials and informs us that their respective images were once placed in the four corners of the shrine.

The Site of Banteay Chhmar

The complex resembles Angkor Thom and other structures attributed to Jayavarman VII. It is one of two sites outside Angkor with the enigmatic face-towers. Besides that, its outer gallery is carved with bas-reliefs depicting military engagements and daily life scenes very similar to the well-known ones in Bayon.

The complex is oriented to the east, where there’s a dried baray (about 1.6 by 0.8 km), which had a temple on an artificial island (mebon) in its centre. There are three enclosures, as typical. The external one, largely ruined, was 1.9 by 1.7 km and surrounded by a moat. The middle enclosure, provided with a moat too, is 850 by 800 m. It contains the main temple, surrounded by a gallery with reliefs 250 by 200 m which constitutes the third inner enclosure.

Besides the main temple and the mebon there are other eight secondary temples. Four stelae detailing Jayavarman VII’s genealogy were placed (though they remain unfinished) at each of the four corners of the third enclosure wall, mirroring the stelae that occupied the four corner-shrines (Prasat Chrung) of the king’s capital at Angkor Thom.

Because of its remote location and its proximity to the Thai border, the complex has been subjected to severe looting, especially in the 1990s. In 1998, 2000 and 2002 the temple was listed by the World Monuments Fund as one of the hundred most endangered sites in all countries.[3]

As example, in 1998 a group of soldiers stole a 30-meters section from the southern wall.[4] The bas-reliefs of Banteay Chhmar once displayed eight exceptional Avalokiteśvaras in the west gallery, but now only two of these images remain: in January 1999 some looters dismantled sections of the western gallery wall containing these wonderful bas-reliefs. The truck that transported them was intercepted by Thai police by chance, and the 117 sandstone pieces of the wall were recovered. At present, these are on display in the National Museum of Cambodia at Phnom Penh. However, there has been no serious investigation of that theft.

Preservation of Banteay Chhmar is currently being led by Global Heritage Fund, a non-profit organization based in California. The organization’s efforts thus far have included training a local Khmer team to conserve the sandstone bas-reliefs of the temple complex. Ultimately, GHF seeks to conserve the largely collapsed temple complex as a ruin “with low-impact, safe visitor access via suspended cable platforms over the fallen structures, along with selective interventions for high-risk structures, bas-reliefs and towers. GHF is also assisting the Cambodian government with the UNESCO World Heritage Site nomination and inscription process.