The report also claimed foreign visits to the World Heritage site rose 12.9% to 1.23 million visits during the first six months of this year, compared to the same period last year. 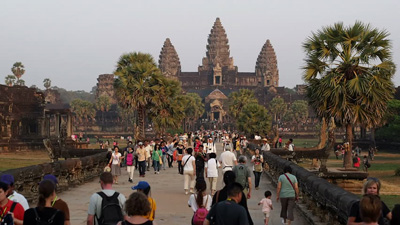 Most tourists to the park were Chinese, South Koreans and Americans.

The remarkable increase in revenue was attributed to a hike in ticket prices since February. Critics at the time thought the entrance fee increase would deter visitors. They argued that carry capacity at the park had been exceeded and a decline in visits would be welcomed. It now appears that it would take a much bigger fee increase to slow down visits. As Angkor Wat is the country’s top attraction it is considered a must-see destination for first-time visitors. China is supplying thousands of first-time travellers to Southeast Asia, with no sign that their enthusiasm for exploring the region is abating.

The entrance fees to the site are now USD37 for a one-day visit, USD62 for a three-day pass and USD72 for a seven-day pass.

To protect the park, Apsara Authority has recently issued demolition orders on unauthorised construction sites located within the park that fail to respond to clearance notices.

From 20 May to 2 June this year, illegal constructions have occurred 523 locations in the Angkor Archaeological Park’s zone 1 and 2, such as at Siem Reap town near the Neang Pov Temple, Banteay Kdei Temple, Banteay Srey Temple and in Bakong district.

Apsara Authority has instructed owners to remove illegal buildings. In cases where the owners have not complied with the order, the authority said it would use administrative measures to demolish them in an effort to maintain World Heritage status in the area.