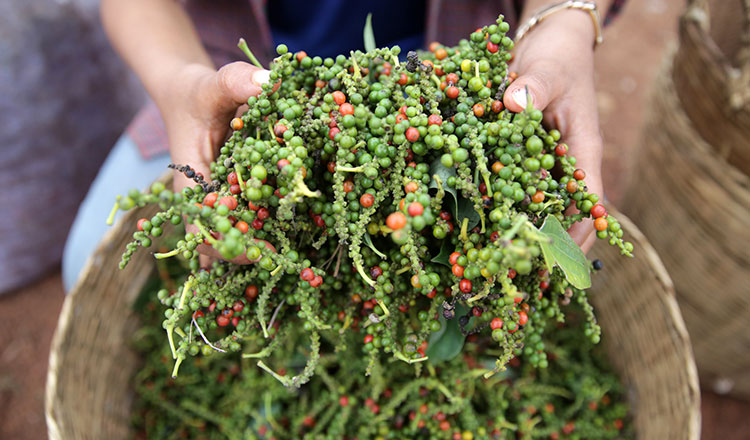 Production of Kampot pepper, the first Cambodian product to obtain geographical indication status, is expected to drop this year due to heavy rains throughout the year, according to producer associations.

Kampot pepper output is forecast at 70 or 75 tonnes in 2018, compared to the 80 tonnes that were produced last year, according to Ngoun Lay, president of the Kampot Pepper Promotion Association.

“There has been many heavy downpours outside of the rainy season, which has damaged pepper farms,” Mr Lay said. “It is really a natural occurrence. Sometimes, farms have high yields, and sometimes they have low yields. It depends on the weather.”

Despite the low output, Mr Lay says members of the association are confident they will be able to observe contracts signed with exporting companies.

He said exports of the commodity so far this year are sluggish.

“During the first semester of the year, only a few shipments of pepper were sent abroad because harvesting is ongoing,” he explained. “Most farmers have managed to harvest at least half of their plantation, but others have only harvested 30 percent.”

One ton of Kampot black pepper is currently valued at $15,000, while red pepper and white pepper cost $25,000 and $28,000 per ton, respectively. The European Union, the US and Japan are the biggest markets for the product.

Kampot pepper was awarded geographical indication certification from the EU in 2015.