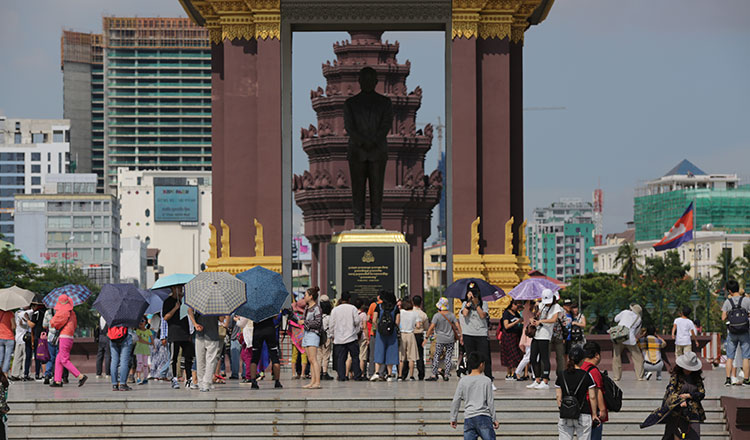 Tourism officials and industry insiders say the upcoming election is not affecting the flow on tourists into the Kingdom.

Kong Sophearak, director of the Statistics Department of the Ministry of Tourism, told Khmer Times that despite this month’s election and the ongoing political rallies throughout the country, the number of inbound and outbound tourists match government’s expectations.

“We predicted a 10 percent growth in tourists this year, and so far that’s exactly what we are seeing.

“According to our data, during the first fourth months of the year, we already have double-digit growth in the number of tourists, which puts us on track to reach 6 million foreign tourists by the end of the year,” he said.

“If we had political turmoil, business activity and travel into the country would of course be disrupted. Fortunately, this is not the case because the political situation is now stable,” he added.

The president of the Cambodian Association of Travel Agents, Chhay Sivlin, echoed the same opinion. She said international tourists keep flocking to the country due to a peaceful political situation and the absence of the demonstrations that marred previous national polls.

“Tourists keep coming to the country as any other year because the political situation is normal; our people are still working and going about their business as usual, so there is no problem,” she said.

She added that CATA will be holding a three-day fair in Phnom Penh’s Diamond Island later this month to promote local tourism attractions.

Sin Chansereyvutha, spokesman for the State Secretariat of Civil Aviation, also agreed tourism activity in the run-up to the election is unaffected by the polls.

“People are travelling in and out of Cambodia as normal. Investors and tourists are aware of the stable political situation and people looking to travel to Cambodia know that there is no problem in the country,” he said.

Norinda Khek, communications and public relations director at Cambodia Airports, said in an email to Khmer Times that the number of people traveling in and out of the country continues to grow as projected.

“We have not seen a slowdown in the number of passengers at the three international airports,” he said, adding that from January to June the airports in Phnom Penh, Siem Reap and Sihanoukville collectively handled 5.2 million passengers, both inbound and outbound, an increase of 23.7 percent compared to the same period last year.

In 2017, 5.6 million international travellers visited the kingdom, an increase of 11.8 percent compared to 2016, according to the Ministry of Tourism.

The sector earned $3.63 billion in revenue last year, an increase of 13.3 percent.

China continues to top the list for most travellers by nationality, with 1.2 million Chinese tourists visiting the Kingdom in 2017. It was followed by Vietnam, Laos, Thailand and South Korea.