Helistar Cambodia, a VIP helicopter charter and scenic flights company, operate to virtually anywhere in Cambodia. Helicopters can be chartered to fly from Phnom Penh and Siem Reap for one-way or return journeys. The basic hourly charter rate is US$1495 per flight hour plus 10% VAT and 10% SPT. They operate modern, air-conditioned French-built Eurocopter Ecureuils with luxury leather seating for up to 5 passengers. They also have licenced Australian and foreign pilots. A pick-up and set-down transfer service is also available at both international airports.

Domestic departure tax From both Phnom Penh and Siem Reap, the domestic departure tax is US$12. The domestic aviation scene in Cambodia is in a permanent state of flux. The only airports currently operating scheduled passenger flights are Phnom Penh and Siem Reap. The third major airport, Sihanoukville, which in the past has seen some activity, is expected to start receiving scheduled flights again in early 2010.

The new kid on the block is Cambodia Angkor Air , a joint venture between the government and Vietnam Airlines, which flies between Phnom Penh, Siem Reap and Ho Chi Minh City (Vietnam). A non-commercial provider of services is Mission Aviation Fellowship which operates flights to Mondulkiri, Ratanakiri, Stung Treng and other destinations. Aid workers and medical cases have priority but seats may be available.

Most other roads are unpaved dirt; many are in abysmal condition, others are maintained fairly regularly (but fall apart with alarming speed in the wet season). On the unsealed routes, overloaded trucks do a good job of smashing poorly built bridges. In all, buffer your schedule and expect delays when travelling around the country, especially on the dirt roads, and doubly so in the wet season.

For longer journeys there is a system of buses and pickup trucks that usually operate from the local market square. Mekong Express has the best reputation for comfort and speed and consequently charges a premium, while Sorya (formerly Ho Wah Genting) and GST offer a slightly cheaper no-frills service. Travel remains cheap, with journeys from Phnom Penh to Siem Reap or Sihanoukville costing under US$5, but bring along something warm if you don’t like freezing air-conditioning and earplugs if you don’t like Khmer karaoke.

There are few, if any, night-time services, so most buses leave in the early hours of the morning (6-7 AM) and the last ones leave in the afternoon. Motorcycle taxis are ubiquitous. For quick trips across town, just stand on a corner for a moment and someone will offer you a lift – for a small, usually standard, fee of US$1 or less. Motorcycle rentals are available in many towns, with the notable exception of Siem Reap.

Display extreme caution if you decide to risk driving or riding yourself, as driving practices are vastly different from developed countries. Local road ‘rules’ will also differ from city to city. In any case, choosing one of the above options will be cheaper and easier for even the most experienced traveller.

Ferries operate seasonally along many of the major rivers. Major routes include Phnom Penh to Siem Reap, Siem Reap to Battambang, and Sihanoukville to Koh Kong. Boats are slower than road transport, charge higher prices for foreigners, and are sometimes overcrowded and unsafe. Then again, Cambodia’s highways are also dangerous, and boats are probably the safer of the two options.

The high speed boat from Phnom Penh to Siem Reap costs US$33 and takes about 6 hours, departing at 7.30am, and offers a spectacular view of rural life along the Tonle Sap river. There is also a few luxury boats operating between Siem Reap, Phnom Penh and Saigon. For something around 150$/day including accommodation, food and excursions, it’s a good alternative to regular boat service.

The boat trip between Siem Reap and Battambang takes longer (especially in the dry season), and is less comfortable and more expensive than taking a seat in a share taxi, but is favoured by some travellers for its up-close view of subsistence farming (and hundreds of waving children) along the river. Taking the boat late in the dry season (April and May) is not advisable as low water levels mean that you must transfer to smaller vessels in mid-river. During the rainy season the boat between Sihanoukville and Koh Kong can also be dangerous due to high waves as well as due to the fact that these Malaysian river taxis were not built for the open sea.

The Royal Railway now is providing train from Phnom Penh to Takeo, Kampot and Sihanoukville and v.v every weekend Friday, Saturday, Sunday and major holidays. It is available only 74 – 76 seats for passengers.

The train will take about 7 hours from Phnom Penh to Sihanoukville or v.v

The schedules are subject to change without prior notice, so you must check with the company before you travel.

The ticket can be purchased at Phnom Penh in Railway Station with cost 6$ to Kampot and 7$ to Sihanoukville. Tickete office will be open from 08:00 till 16:30 each weekday and 06:00 to 12:00 each weekend. They are in the process to open up passenger sales at Takeo, Kampot and Sihanouk Ville soon. 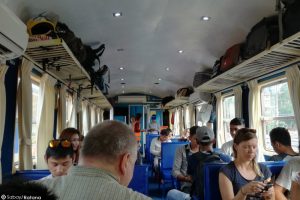 They are also great fun to ride on and they are actually reasonably safe, and the drivers are friendly. They cost around $2 per person for a short journey and around $6 to hire one with a driver. Ask locally where you can find a norry, or you can find one at Battambang station.